One day I was flipping through my Eastern Europe Lonely Planet book and realized I had done most of the more known destinations like Czech Republic, Hungary, Poland, even Croatia. So I started reading about Estonia and subsequently Latvia and Lithuania. I was hooked and started researching more. Buses and trains seemed to take a lot of time and money between these countries so we decided to do a road trip to venture a little further than the normal destinations and explore some hidden gems. We could only fit in Estonia and Latvia due to time and not wanting to rush through. So we decided Lithuania would have to be another time.

We flew into Helsinki and took the 2 hour ferry ride into Estonia. It was this massive cruise liner style ship. Coming from Washington state, a ferry to me means a small ship that can hold cars and a few hundred people with some basic food and drink facilities. This one was like we were taking a cruise around the Baltics complete with sleeping cabins. We had fun exploring the many levels on our two hour ride including the karaoke and duty free sections.

Tallinn was our first stop. We stayed just outside the old town so it would be easy to get around with reasonable priced accommodation. Tallinn really is beautiful and the old town is very charming. We had a really enjoyable time exploring the cobble stone streets, climbing up the distinct red towers, stumbling upon cave like cafes, and trying delicious food like honey beer and a garlic themed restaurant (where literally everything was garlicky from the beer to the dessert). 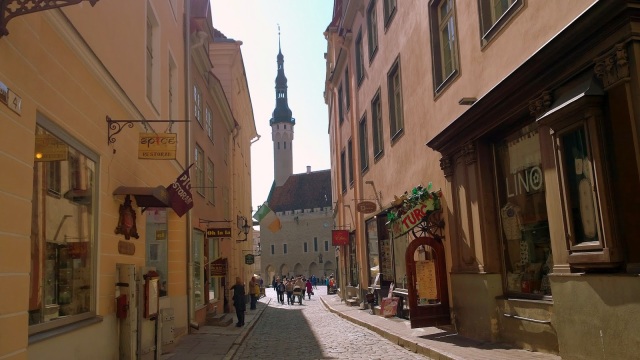 We also got a chance to see Easter Sunday service in the city’s beautiful Alexander Nevsky cathedral. We weren’t allowed to take any pictures inside but the experience of being to see the service was really unique. The church is Russian orthodox so the priests wore long black robes, had long beards, and tall black hats. The church itself was very opulent and was built between 1884 – 1900 but was almost demolished in 1924 since so many Estonians saw the church as a symbol of Russian oppression. Thankfully (since it’s so beautiful and different) it was saved from being demolished due to lack of funds and has since been restored. Check out this similar Alexander Nevsky Cathedral built in Warsaw around the same time but was demolished by the Polish (for the same reasons of negative views towards the Russians) in mid-1920s.

From here we started the actual part of our road trip. This was my first time driving in Europe but since Estonia drives on the right hand side of the road and the car we got was very similar to my Corolla back home, most of my fears of driving in a foreign country were instantly gone. The roads are very well maintained, long stretches of highways with moderate traffic. Nothing like UK style roads with roundabouts everywhere and clogged ‘motorways.’ 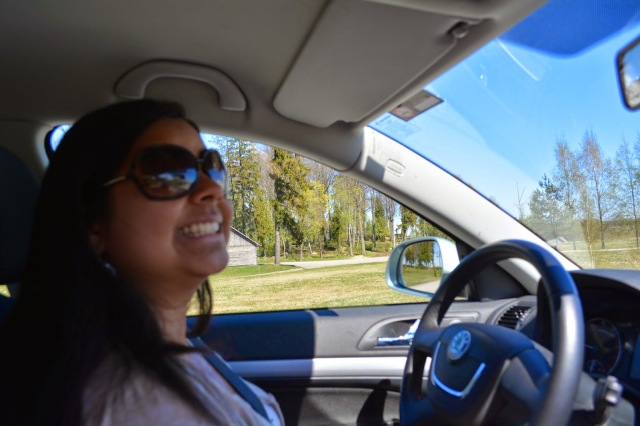 Our first stop was the coastal town of Parnu about 2 hours / 80 miles away. Since Parnu is a beach town and we went in spring, it was not a particularly crowded place which made it nice to roam around. We promptly headed to the beach, and although it was cold, the sand in our toes made it worthwhile. We stumbled upon a set of rocks towards the end – they seemed endless going off into the distance. Parnu in general reminded me of what I assume America would be like in the 60’s with old style buildings, the white picket fences and huge SUVs. We even had amazing pizza there. Not a normal place you’d think to be reminded of the US! 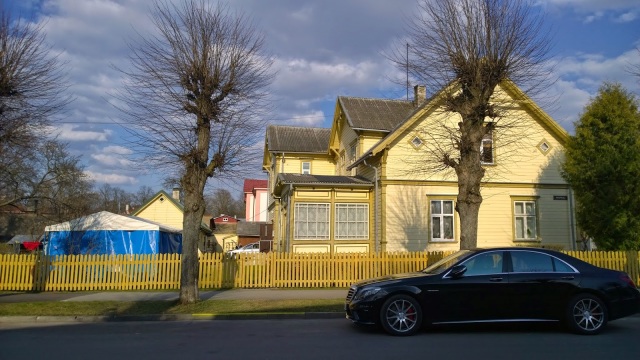 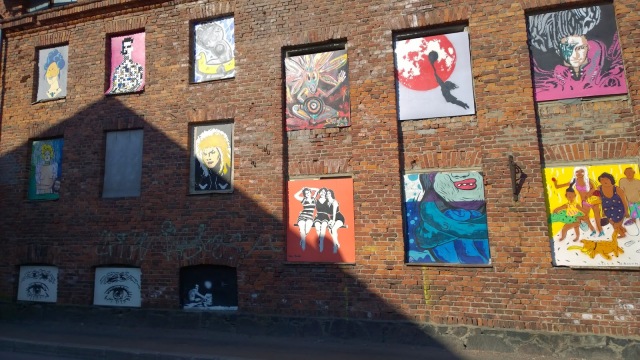 Next stop was Latvia!! We got up early(ish) in the morning to set off for Riga, the capital of Latvia. It was a 3 hour / 120 mile drive. Instantly as you crossed the border the roads became way worse with potholes, they were smaller in size and you definitely felt like you were in another country. Earlier there used to be an actual crossing between the two countries but since both are in the EU now, the border patrol booths are no longer staffed and just like in other parts of Europe, you can usually no longer tell when you’re in another country other than a sign post welcoming you (and in this case – the roads!).

Riga was much cheaper but bigger in comparison to Tallinn and had a more Soviet feel mostly due to the historical influence and large percentage of Russian population that still lives there today. It had an old school charm with massive but beautiful buildings and a very well maintained old town with cobblestone alley ways connecting the main roads within the old town. It was really nice, a pleasant feel to the city.We stayed on the other side of the bridge – the newer part of town and this had a very modern feel to it with massive open spaces and new supermarkets and hotels. Just to give you an idea a 2 night stay at the brand new 5 star hotel cost the same as 1 night in a 3 star small hotel in Tallinn. So get over to Riga before it gets expensive! 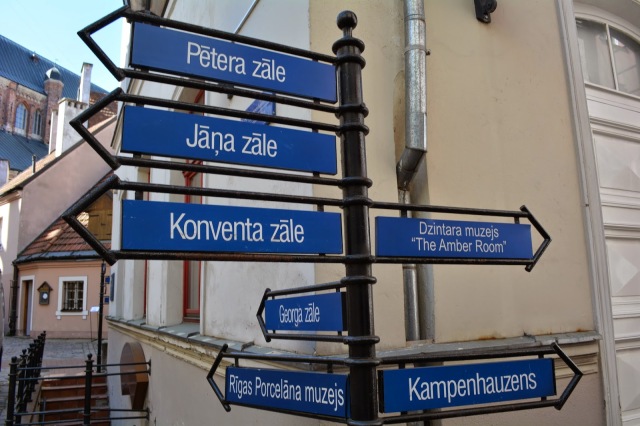 One of my favourite things was the beautiful Art Nouveau architecture with more than 800 buildings built in that style in and around the city center. Such gorgeous details on each of the buildings, it was a real treat to wander around and discover these unique sites.

Another incredible place was the Central Market. With 3000+ stalls over 778,000 sq. feet, its a really fun place to walk around. Everything from meats, cheeses, vegetables, cooked foods – it definitely took us a while to cover the area and figure out what we wanted to eat there and what to take back for midnight and road trip snacks.

After Riga, we wanted to see more of the countryside so we decided to explore the Sigulda area and the Guaja National Park. The area is really pretty, filled hikes, natural beauty, and castles from different eras. We went to the main tourist office to get a map and they had walking and driving trails so it was very easy to just show up and figure out how to get around. It was a really nice change to do some nature-y things instead of just seeing cities and towns. We really felt like we were exploring the country off the beaten track.

On our way back, we stopped at the twin towns of Valga and Valka on the Estonia / Latvia border. We mainly wanted to stop here because this is where the trains switch if you were journeying via railway and wanted to see the switch from the modern Estonian railway to the very very old Latvian railway. 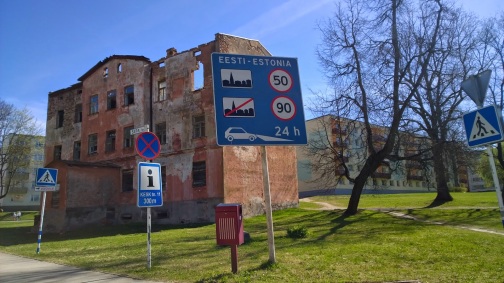 After a quick lunch stop in Tartu, a university town (mainly because it was on our way back to Tallinn) we headed back to Helsinki via the ginormous cruise liner and ended the European road trip! A really fun and enjoyable time discovering new places. Highly recommend these countries especially before they get overrun with tourists! 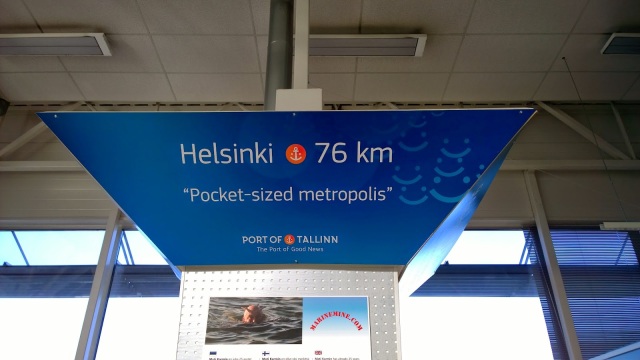 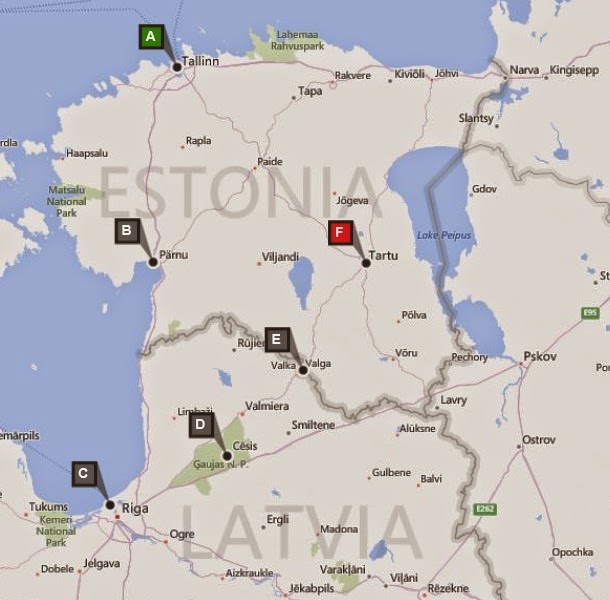