Krakow was a nice surprise. We only went for a weekend which was the perfect amount of time in the city. The first day we spent exploring the cute and compact old town area and exploring the Jewish quarter. The city is really well preserved because it is one of the few places in Eastern Europe that wasn’t bombed during WWII. The city had a small town feel so it was great to explore by foot (as are most European cities) with lots of unique shops and cafes and less of the normal chains found in every city these days. We found this free walking tour which was a great way to explore as well…because it was free and the guides were really knowledgeable (We paid the guide a tip at the end – don’t worry)

The Jewish quarter was also really interesting because of the all the history associated with it. Apparently at one point there were over 1 million Jews living in this area but now only officially 200 live there. The number is so low obviously due to the Holocaust but also since many don’t even know if they are Jewish or not as their ancestors changed names and generations continued with the new name.

The second day we did Auschwitz and Birkenau. It was an emotional and thoughtful day to say the least. The Auschwitz exhibitions are done really well with different aspects of the story told. I won’t say much about it because its really something to experience for yourself. On a side note, we took a tour that picked us up at the hotel but it is also easy to do on your own by public bus if you want to save some money.

Another thing I didn’t know was that Pope John Paul II was from Krakow! There are signs everywhere of where he visited and where he stayed. Pretty cool. The Jewish quarter was really fun to go out in at night, there are a lot of hip cafes and bars – one is called ‘Alchemy’ and has a wardrobe door like the one in the Narnia books! It was fun going through the various doors to find more rooms that all from part of the bar.

Overall, Krakow was great and cheap which is always such a nice surprise from the UK. I highly recommend going for a weekend!

Tip – the Krakow airport is really tiny so after you’ve checked in, there is no need to go through security until close to the departure time. Instead spend it at the restaurant near the check in counters since you will actually get a seat and have a relaxed time instead of sitting in overcrowded gates. 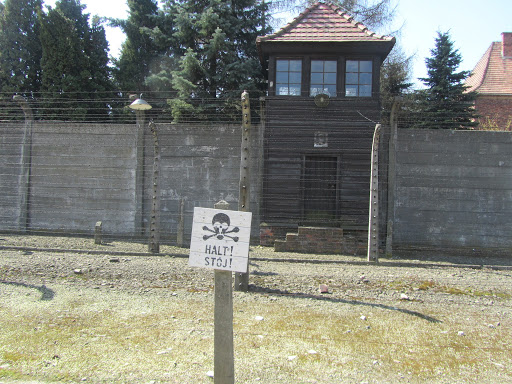